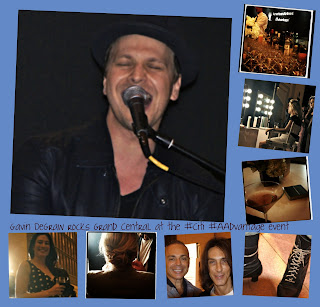 If you’re looking to launch a new MasterCard in the current economy, let’s face it, you better either have some damn good incentives, or a super hot launch party complete with requisite celeb stylists and rock stars. Funnily enough, just last night, Citi and American Airlines managed to pull that off all under the stunning backdrop of Grand Central Station in New York, where they’ve brought The Admirals Club lounge to Vanderbilt Hall

Commuters were drawn to peek in at the buzzy atmosphere as Gavin DeGraw belted out his hit ‘Not Over You’, and whilst this Stylist was swooning over her new musical crush, she also managed to sneak in a quick free ‘messy up-do’ by celeb stylists Joel Warren and Edward Tricomi of Warren Tricomi fame.

After a little banter with the boys about their own rock band adventures, the latest on the New York club scene, and some advice on creating my ‘up-do’ at home in 5 minutes with a curling iron….yeah right…it was time to pay attention to Citi’s Terry O’Neil.
So here’s the gig The Citi Executive/AAdvantage World Elite MasterCard hands you a bunch of member privileges as well as let’s you spend money – what’s not to like?
There’s Admirals Club membership privileges, no foreign transaction fees on purchases, enhanced airport experiences like priority check in and pre-boarding, as well as waived baggage charges for your first domestic checked bag. Quite frankly they had me at ‘priority check in’…but Gavin DeGraw did probably swing it for them on the night.
Clearly Terry O’Neil must have seen a few airport lounges in his time, so when asked which is his favorite globally he plumped for JFK.
As for the style on the night? Apart from Messrs. Warren & Tricomi who belie their years and ooze effortless style, we saw this seasons polka dots in dresses and pumps and the most gorgeous vintage booties amongst the city suits.
The Admirals Club lounge is at Vanderbilt Hall until Wednesday, opening daily at 11.30am, so pop on in on your commute home.
For more info on the card take a peek here…
For more from Notes from a Stylist have a nose here...